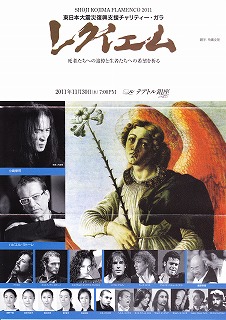 Since the Great East Japan Earthquake was reported, people around the world have shared our pain and given their hearts to us.

The world of flamenco is no exception, and it's been bringing rays of hope to us through various support activities all over Spain.

On June 3rd I went to Spain to appear on stage as an advocate of FLAMENCOS POR JAPON, a charity gala held in Córdoba. The idea had come from Javier Latorre, one of my best friends, and I danced soleá to pray for reconstruction of East Japan along with many representative artists of Spain. That night I was goaded on by a desire to put on a gala in Japan, a gala which would not be seen anywhere else in the world. Thus my dreams has been fulfilled today thanks to Javier Latorre and universally acclaimed artists of flamenco.

In September Javier Latorre came to Japan to choreograph «La Celestina» and at the same time he dedicated to me a choreography for a poem of Poet in New York of F. G. Lorca sung by Enrique Morente, the great cantaor who has passed away recently. Through this charity gala, a one-night stand, we wish to grieve for the victims' souls and give survivers hope and strength to live.